If the eyes are the window to the soul, the Cavalier King Charles Spaniel has the kindest soul in the doggy kingdom. Once you peer into the eyes of your Cavalier you will enjoy a vision of complete devotion and will fall completely under their spell.

Kings may have ruled countries but Cavaliers ruled kings. Now they are taking over families around the world!

The first recorded royal person who had a beloved Cavalier spaniel was Mary Queen of Scots. She was beheaded in 1587 and it was reported that a little spaniel walked close under her skirts to the scaffold. The dog would not leave her body until someone picked him up and took him away. Charles I also was beheaded and it was also reported that his black and white Cavalier spaniel named Rogue was at his side. It was under Charles II's rule that the breed became famous. They followed him wherever he went and had the run of the castle. It has been reported that the Queen and her court used the Cavaliers to lay on their hands for warmth when they were riding in their carriages on cool evenings. Hence the nickname "lap dogs". (they really do love to lay in your lap)

The long nosed toy spaniel went out of fashion during the reign of King William when they brought the pug (their favorite breed) from Holland. There may have been some interbreeding between the Pug and the Spaniel and the result was a toy spaniel with a domed head and flat muzzle. The dog was called the King Charles Spaniel or "Toy Spaniel".

In the Victorian era, toy spanels came into the public eye because of the Queen's beloved tri-colored pet named Dash. He was not one of the more popular short nosed spaniels, but is recognized in potraits painted of him as being very much like the modern Cavaliers.

The reappearance of the orginal type of toy spaniel, the Cavalier, is credited to Mr. Roswell Eldridge, an American who went to England to find the beloved dog. He could not find them, so he offered a cash prize for "Blenheim Spaniels" of the old type as shown in the pictures of Charles II's time. This sparked renewed interest by a small goup of dedicated English breeders, led by Mrs. Amice Pitt. The dog that was to be most influential in re-establishing this ancient breed was Ann's Son.

In 1945, once there were a number of the long-faced types in the championship ring, their breeders applied to register them separately.

Cavaliers are still very popular in England with royals, the aristocracy and those high in the government. Princess Margaret, sister of the Queen, treasured one named Rowley who was her companion for many years.

To this breed it doesn't matter if you are a King or commoner, rich or poor, all that matters is that they have someone to love and to be loved by in return.

Mary Queen of Scots and Her Loyal Cavalier
Mary Queen of Scots is the first royal on record to have owned the precious spaniels (who had yet to be named the Cavalier King Charles Spaniel).  She was probably introduced to the breed in France where she spent most of her childhood.  She is credited for bringing the little dogs to Scotland and England.
In 1587, by order of her cousin, Queen Elizabeth I, she was beheaded.  The written record of her death, according to Lord Burghley, documents that as she proceeded to the scaffold, a little spaniel walked so close to her side that he was covered by her voluminous skirts.
Legend has it that after Mary was dealt her deathblow, the headless body began to move.  Mourners and observers alike were aghast believing that the ghost of the Queen had not left her body.  It was not until the forgotten little dog emerged from beneath her skirts that the mystery was solved.
The black and white spaniel refused to leave her body until someone picked him up and carried him away.  He died a few days later, and it was assumed that he was consumed with grief over the death of his beloved Queen.

King Charles, the Cavalier King
Charles II of England was known as the Cavalier King, and his first parliament as the Cavalier Parliament.
He adored the treasured toy spaniels and he became known for allowing the little dogs to follow him everywhere, always accompanied by at least three.
It was documented that the King was so enamored with his dogs that he was accused of ignoring the issues of his kingdom.
One royal decree he did mandate was that every public building, including Parliament, welcome the royal spaniels.
The King permitted his pack of spaniels to reside in the royal apartments.  One member of the court complained of the general disorder, disgusting odor, and chaos inside of the bedchamber.  He declared that that king “took pleasure in having a number of little spaniels follow him and lie in his bed, where on occasion he watched as a mother spaniel gave birth to her puppies, which rendered it very offensive and indeed the whole room nasty and stinking.”
King Charles II died of natural causes in his own bed surrounded by over a dozen of his beloved spaniels.
When in 1925 a name had to be chosen for the breed, Cavalier King Charles was selected in honor of the famous king who loved them.

King James II and Loyalty
After the death of King Charles II, his brother James II succeeded him to the throne.  He was also charmed by the spaniels and kept them as the royal dogs.
On a voyage overseas, a monstrous storm threatened to sink the ship.  When King James II was alerted to the dangers awaiting them he was heard to cry, “Save the dogs and the Duke of Monmouth!”  He was as loyal to saving the lives of the toy spaniels as he was his own son, the Duke.

The Duke and Duchess of Marlborough and Blenheim Palace
The Mystery of the "Thumbprint"
In the early eighteenth century, John Churchill, the first Duke of Marlborough, became infatuated with the Cavalier King Charles spaniel.  He delighted in breeding a pack of red and white Cavaliers for hunting, as they were hardy little dogs able to keep up with a galloping horse.
The Duke of Marlborough was a high ranking military officer, the commander in chief to Queen Anne.
The Duke’s estate, often referred to as the “English Versailles”, was a gift from the Queen as a show of gratitude for the general’s victory over the French at the Battle of Blenheim in 1704.  This battle was crucial to saving Europe from domination by Louis XIV.  The estate was given the name Blenheim Palace in honor of his glorious victory over the German town.
Legend has it that while the Duke was away fighting the Battle of Blenheim, Sarah, the Duchess of Marlborough, sick with worry about her husband’s safety, sat in the garden with a pregnant Cavalier on her lap.  She stroked and caressed the expectant mother, absently pressing her thumb on top of the spaniel’s head.
When the news arrived that the battle was won and the Duke was safe, the puppies were born.  All of the tiny Cavalier Kings were marked with a chestnut-colored imprint of the Duchess’s thumb in the middle of their forehead.  This is the origin of the lozenge or thumbprint found on the head of a perfectly marked Blenheim Cavalier.
These little chestnut and white spaniels came to be known as the Blenheim – a royal name after a royal estate.

Queen Victoria and Dash
As a girl, Queen Victoria had a tricolor (black, chestnut, and white) Cavalier named Dash.
Victoria was devoted to Dash and on the day of her coronation in 1837, she left the momentous event, changed her clothes and gave her beloved spaniel a bath.
Queen Victoria commissioned many artists and artisans to create images of Dash, including needlework, paintings and porcelain figures.
When Dash passed away, Queen Victoria herself wrote his epitaph.
"Here lies Dash, the favorite spaniel of Her Majesty Queen Victoria, by whose command this memorial was erected.  He died on the 20th December 1840 in his ninth year.  His attachment was without selfishness, his playfulness without malice, his fidelity without deceit.  Reader, if you would live beloved and die regretted, profit by the example of Dash."

Weight: proportionate to the height 13-18 lbs

Trainability: Eager to please but sensitive, responds best to praise

Good with other Pets: Yes 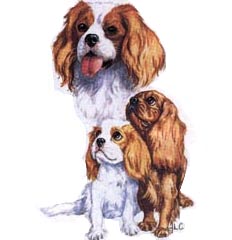 Why Buy A Cavalier?

Great with other animals

Live to please you 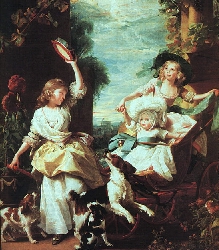 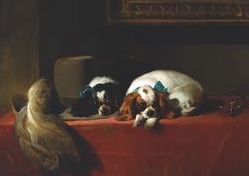